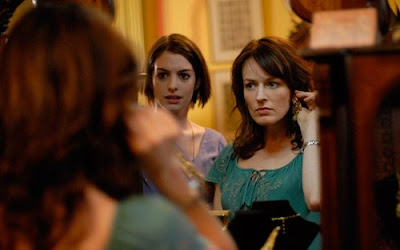 I spent the afternoon watching a film called “Rachel Getting Married”. It stars Anne Hathaway, Rosemarie DeWitt and the great Debra Winger. My FI was like, “Who’s Debra Winger?” Ummm, Terms of Endearment…Officer and a Gentleman…Urban Cowboy…?? Ring any bells?!? The look on his face said it all: clueless. My poor guy, he doesn’t share my love for old(er) movies.

The film is an exquisite little piece of indie genius. (I guess it can’t really be called “indie” if it’s put out by Sony Pictures…but it gives off that indie vibe.) It’s a funny, out of control, sad and touching tale that follows a dysfunctional family over the course of a wedding weekend. The storyline starts with Kym (Anne Hathaway) as she is released from rehab and travels to her father and stepmother’s home for her older sister, Rachel’s (Rosemarie Dewitt) wedding in Connecticut. Rachel is madly in love with her musician fiance and bitterly upset with her sister for reasons that become clearer as the plot unravels. Kym is a chain smoking mess who is also vulnerable and deeply scarred. The relationship between Kym and her family is complex and at times, strained. Rachel and Kym’s mother (Debra Winger) remains awkwardly distanced from her daughters choosing to take a background role in her daughter’s wedding. I was a bit disappointed with the tiny role Debra Winger played in the film. Her role, nonetheless, was pivotal. I just would’ve like to have seen more of her. I never heard of DeWitt before and thought she did a tremendous job. And Hathaway is a true gem. She creates a character teeming with both pain and beauty. Her role in this film rises far above any of her past work (don’t get me wrong, I love Princess Diaries and The Devil Wears Prada)…but this is a side of the young actress I had never seen before.
The way the movie builds around the theme of a wedding is also quite interesting. When you take away the dresses and the jewelry and the food and the band, what is left is your average dyfunctional family. Weddings are happy occasions. But let’s face it…at times they force us to deal with a lot of tough issues. (Case in point: check the boards on WeddingBee. They are never without a handful of posts devoted to family problems, re-hashings of old feuds, new feuds, etc.) But in the same vein, that’s why weddings can be so great. They bring us together. They force us to have those tough conversations. They encourage forgiveness. They heal old wounds (even if just for the sake of getting through one day together).
I think everyone with a less than perfect family can take something from this film. Check it out and tell me what you think.
(Image source)
Tags: movies

Something to drag your spouse to…

Hair up, hair down…what to do?